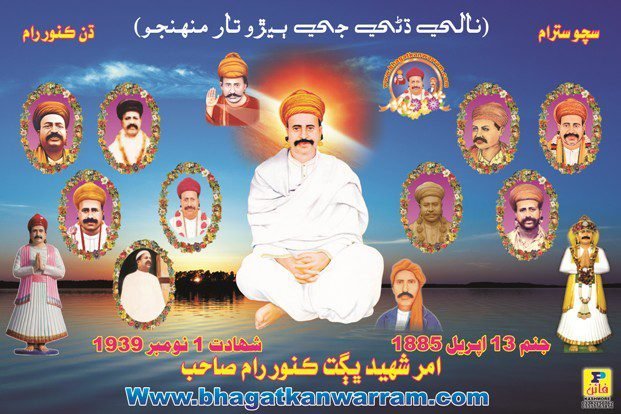 Saint Kanwarram is a household name in the Sindhi community. He is respected and revered by Sindhi Hindus and Muslims alike all over the world. Bhagat Kanwarram’s photo is hung on the walls of Sindhi houses along with the photos of other Saints and Deities. He is prayed, professed and praised like Gajanan Maharaj and Gadge Baba, Saibaba, Tukaram, Namdev, Narsi Mehta. His life and works very much simulate with the life of Saint Gadge Baba of Amravati. Kanwarram had a melodious, sweet and sonorous voice. He attracted the hearts of the Sindhis with his ‘Bhajans’ (devotional songs) rendered from the inner core of his divinely inspired and intoxicated heart in a sweet voice; exactly like Lord Krishna who enchanted the ‘Gopis of Brindaban’ with the sweet, enchanting and magical voice and heart piercing music and notes of his flute.

Saint Kanwarram was a true Saint in the real sense of the word. Now the question arises what is the definition of a Saint?

According to Jacques Douillet in his book ‘What is a Saint- Thus Set Apart’ have a faith, courage to choose, unified love, genius, heroism, ascetic and the holiness in the making of their being.

The definition of Saints has been a part of the general growth and evolution of social complexities and its spill over and the human response to contain them. It may be observed during the course of time, that how the role of Saints has changed from its singularity to social commitment. Originally, the word is derived from the Latin word ‘Sancio’ and in turn from the word ‘Sanctus’ meaning to purify. In ‘Sanskrit’, it is a plural of the word ‘San’ that means pure existence or becoming pure or remaining pure. However, the connotation attached to this word in ‘Rigveda’, Chandokya Upanishad and Taitisiya Upnishad describe it as ‘one who knows’ in the sense of knowledge.
However, their purity and knowledge the Saints gradually came to be bestowed upon the task of social reforms Saints have been an institution by themselves in all the countries of the world they have inspired and lead people to peace, justice and good conduct from time to time. The entire ethos of Indian culture from its inception derives itself from Saints and Sainthood.
The Soul force acts as a nuclear fuel to cultural reactors. Saints save the humanity; nuclear weapons destroy the humanity.
The reason for the renewed popularity of Saints is the secularity of their role. Saints proper do not belong to any religion. They belong to humanity and the welfare of humanity has been their goal. In discharging their impartial duties of social reforming, many Saints had suffered at the hands of power that be in various countries all over the world. The life of Saint is not a bed of roses but a bed of thorns and thistles. Poverty and suffering is the necklace of the Saints. The following couplet of Longfellow is wonderful and elaborates the above version and statement:
” The heights by great men
reached and kept were not
attained by sudden flight,
But they while their companions slept,
Were toiling upward in the night”.